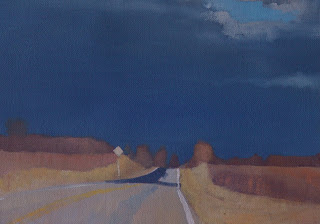 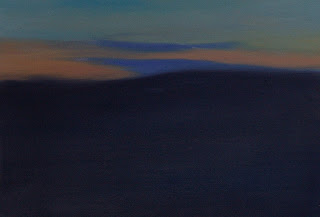 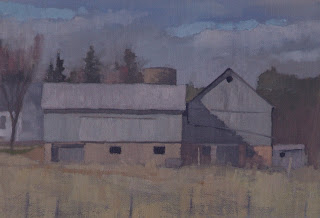 4.3.09
Painted near Port Washington today. Somedays it is hard to get the ball rolling, and some days everything is magical and you can’t do anything fast enough. Today was more of the former than the latter. Had to get gas, and then was hungry and went to Subway and the took a couple wrong turns. Then ended up painting a barn that I remember painting last year on Kentucky Derby day. I wasn’t so excited and then I saw a couple hawks sparring, and had to say to myself, you know I am lucky to be outside observing and being around things that are important to me. I was focused and had a good day from that point forward. I found some structures on Falls Rd. that I had painted years ago and was happy to see them and paint them again. The north to south stratus clouds helped out as they seem to stay in position longer for me to paint them, or at least repeat themselves. After feeling unmotivated in the beginning at the end I got into a groove and did seven paintings that I was satisfied with.
Posted by Andrew Clair Fletcher at 9:52 AM

It is always fishing season

Andrew Clair Fletcher
I paint completely from life or from memory and that I find that spending time on a computer gets in the way of my process of daily observations and emotional connection to the land. Please email me if you would like to get in touch.